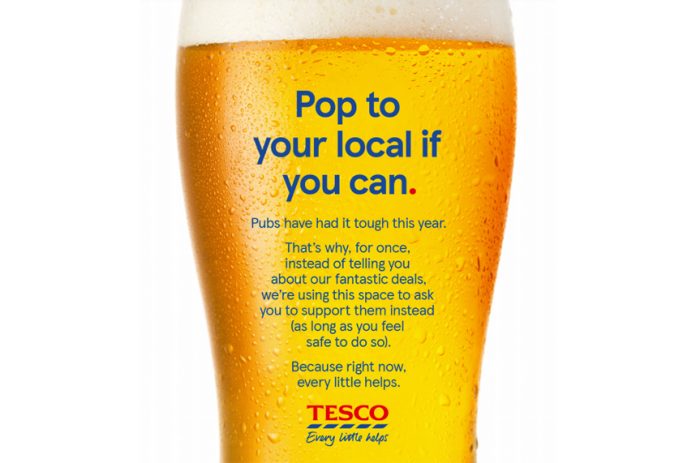 The past year has been tough for most businesses since a major part of the world was shut down because of the virus. The burden of this lockdown came upon the local business owners more as established brands could continue their business online, but it was not the same for local shops and brands. Pubs, gyms, local shop owners, daily wage workers, etc. suffered the most.

Coming to pubs and bars, last year was a nightmare for the pubs in the UK. A business that thrives on social gatherings came to an abrupt halt. Pubs were closed down with little warnings and no information about their re-openings in the future. Based on a survey conducted by British Beer & Pub Association, UK Pubs lost around $11.4 billion in beer sales alone!

Well-known brands and supermarkets were to a very large extent not affected much since they shifted their business online and continued selling through home deliveries.

Post lockdown, as pubs and clubs re-opened for the people in England, TESCO – the British multinational groceries and general merchandise took a step to point out to the consumers what a difficult journey the local business owners have had. Thereafter, ‘Pop to your local if you can’ was designed as a print ad to encourage customers to go and buy from local pubs. The ad consists of a large mug of cold-refreshing beer thereby creating the “feel-good- factor” and quotes

“Pubs have had it tough this year. That’s why, for once, instead of telling you about our fantastic deals, we’re using this space to ask you to support them instead (as long as you feel safe to do so). Because right now, every little helps.”

Daniel Seager and Richard Biggs of BHH created the ad, and MediaCom planned and bought the media.

The ad gained a lot of positive responses in the newspaper and on social media, from the public as it was very rare for consumers to see a brand promoting, something publically, other than their own products. People congratulated TESCO for the brilliant move, although some pointed out that the ad mimics Burger King’s goodwill campaign, last year, wherein the food chain encouraged their customers to purchase from other brands.

Shubhlakshmi - August 8, 2022
0
To highlight the difficulties in modern dating and how the brand can bring a fresh shift to the experience, Center fresh has...