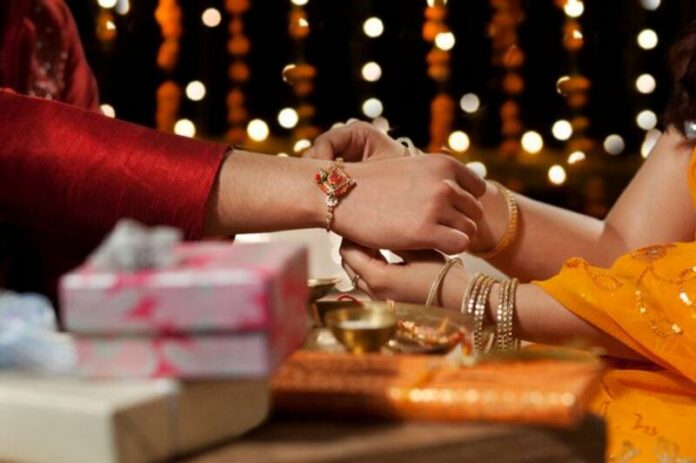 Every sister enjoys going above and beyond the conventional rakhi selection for her brother on the occasion of Rakshabandhan, a celebration that honours the traditional brother-sister tie. It is celebrated on the last day of the Hindu lunar calendar month of Shraavana, which is usually around August. This rite is now often referred to as “Raksha Bandhan,” which means “the link of protection, obligation, or care” in Sanskrit.

This Gujarat-based designer has taken the rakhi collection to the next level with unique variations of the basic thread, from huge names to independent labels. He created a one-of-a-kind ‘diamond rakhi’ by combining a valuable stone with an auspicious thread symbolising brother-sister bonding. According to news agency ANI, the Gujarat-based company applied environmentally responsible concepts in the construction of ‘diamond rakhi’ by using recovered gold. He estimated that this beautiful rakhi would cost between 3,000 and 8,000 rupees.

“We created eco-friendly rakhis out of recycled gold, while diamond was employed in an unusual method.” “It would cost between 3,000 and 8,000 bucks,” businessman Rajnikant Chachand told ANI.

According to the agency, these diamond rakhis are being sold by merchant Rajnikant Chachand in Gujarat’s Surat city.

In addition, the Ministry of Communications’ Department of Posts has created special rakhi envelops for transporting the auspicious band to distant locations during the celebration of Raksha Bandhan.

Rakshabandhan, a holiday commemorating the tie of affection between siblings, will be held on August 11 this year.

According to the ministry, these envelopes have a distinct feel and are entirely waterproof and tear-proof. These come in 11cm x 22cm sizes and appealing patterns with a peel-off strip seal mechanism for simple sealing at a cost of 15 per envelop.

The selling of these rakhi envelopes has already commenced in Delhi’s post offices and will continue until August 8 for posting inside the national capital and until August 7 for shipping rakhis to other states.

Passionate in Marketing - January 25, 2023
0
One97 Communications Limited (OCL) that owns the brand Paytm, India’s leading payments and financial services company and the pioneer of QR and...