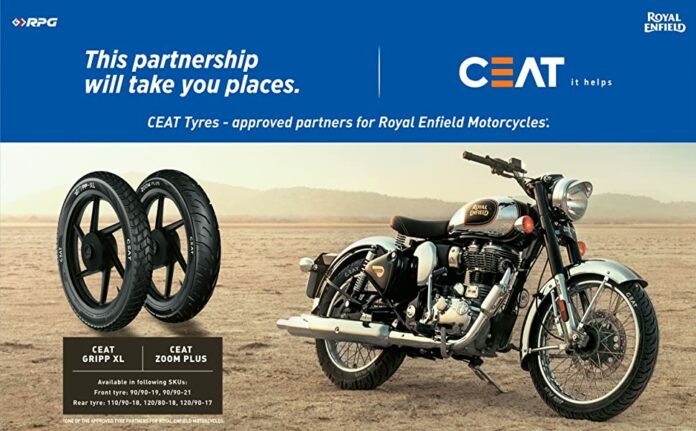 CEAT Tires and Royal Enfield came together on the occasion of Friendship Day to celebrate their long association with a remarkable social media campaign. #KaroSafetySeDosti. CEAT offers the widest range of tires for all or any segments and manufactures first-class radials for heavy trucks and buses, and light commercial vehicles, in both categories with inner tubes and tubeless. CEAT tires will be the most effective choice if you want a high-performance tire for highway and city use at a cheap price. Royal Enfield is a Motorcycle company, working since, 1901. Royal Enfield has created many strong motorcycles, like Bullet, Himalayan, Meteor, Classic, and many more. Royal Enfield will soon launch the Hunter 350 bike in India.

The campaign was started by a tweet, from CEAT Tyres. This was cleverly framed, in rhyming verse, and Royal Enfield’s instant response on Twitter played along with this poetic theme. Following another tweet, CEAT Tires presented a short video that showed the bond, between the brands and highlighted the safety aspect. At this time, Twitter pranks are done to hear their customers and friends. After some time, some interviews were joined by some well-known influencers and many supporters of Royal Enfield motorcycle brands.

The #KaroSafetySeDosti video released by CEAT was a gentle reminder that true friendship between two individuals only means exchanging mementos like a friendship card or a ‘BFF mug’. Since the video has an interaction between 2 biker friends, we realize that true friend cares about each other’s safety first. The specific putting on of the helmets, and also the tightening of the strap in the helmet are also similar to their friendships. As the young couple (with their helmets now secured) set out, hit the road, and are confident they are driving safely.

Arnab Banerjee, COO, CEAT Ltd., said, “on the occasion of Friendship Day, it is our great pleasure that the bond of friendship that unites Royal Enfield and CEAT Tyres has celebrated with a joint campaign ‘#KaroSafetySeDosti’. We look forward to continuing to celebrate our friendship in the years to come.”

Passionate in Marketing - September 23, 2022
0
National, 23rd September 2022 Archies, the forerunners in the social articulation industry, is celebrating Daughters Day by launching its unique and social #BondBeyondBlood...