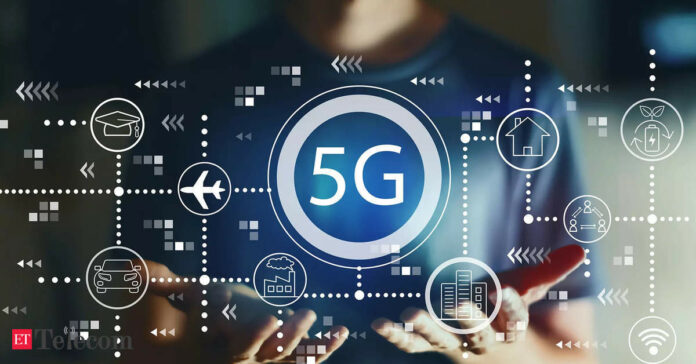 According to brokerages following the auctions, telcos are likely to buy 5G airwaves at the reserve price and may not bid aggressively because surplus spectrum has been made available.

According to them, Bharti Airtel and Reliance Jio are expected to buy the pan-India spectrum, while Vodafone Idea may only bid for a few circles because of its financial difficulties. However, carriers are concerned about the Centre’s plan to allow captive 5G networks to purchase airwaves.

“We don’t expect a bidding war because more than enough spectrum is available for the three operators,” JP Morgan analysts wrote in a letter to investors on Thursday. According to the department of telecoms’ announcement soliciting applications, 330MHz of airwaves have been made available for each circle in the 3300-3650MHz frequency range. For a pan-India rollout, an operator will need 100MHz.

“We observe that, despite reserving 40MHz in the 3,300MHz band for public sector telecoms, there is sufficient spectrum for the three operators,” analysts at Nomura Global Markets Research wrote in a note a day after the government announced that 5G auctions would begin on July 26.

Given its stretched balance sheet and inability to acquire financing, sector experts questioned Vodafone Idea’s participation but said Bharti Airtel and Reliance Jio were likely to participate with a projected annual payment of Rs 2,840 crore, including interest, for pan-India 5G spectrum.

“Despite the absence of any upfront payment requirements, we remain skeptical of Vodafone Idea’s ability to meaningfully participate in the auctions because it would necessitate immediate servicing (as opposed to a 3.5-year moratorium on all existing spectrum debt), which would be difficult given its stretched balance sheet and elusive equity fundraising,” Credit Suisse analysts wrote in a note to clients.

Given its capex restrictions, long-delayed fundraising, and current gaps in 4G coverage, analysts at Nomura believe Vi might limit its bid for 5G spectrum to a few circles.

While both Airtel and Reliance Jio were well-positioned to participate in the 5G auctions, Airtel remained the primary benefactor of the improved average revenue per user (Arpu), improved regulatory environment, and organic market share increases, according to the Swiss trading house. Another benefit will be the elimination of spectrum usage fees, which will considerably cut the cost of acquiring a new spectrum.

“We expect Bharti and Jio to participate in the auctions, but note that given the likely demand-supply imbalance and yearly auctions, telcos may be picky on the quantum this time,” JP Morgan analysts wrote in a note.

“Given that the 5G opportunity is a play on enterprise solutions rather than retail consumers, allowing businesses to directly get spectrum to put up captive non-public networks is a more problematic situation” Kotak Institutional Equities analysts said.

However, a group of experts claimed that the fears were unfounded. “Large organizations would help carriers build their enterprise business by accelerating the private network ecosystem.” ICICI Securities’ vice president of equity research, telecom, media, and chemicals, Sanjesh Jain, said.

Rakesh Acharya - June 28, 2022
0
To improve road safety in India, the Central Government of India has suggested the Bharat NCAP car assessment programme. Under this programme,...