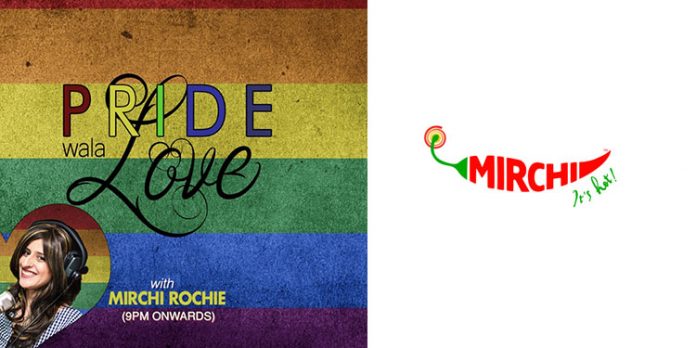 Mirchi launched its ‘Pride Wala Love’ campaign to highlight the love stories of those who, against all odds, choose to live and love on their terms, those of the LGBTQ+ community. The week-long radio-cum-digital campaign kickstarted on February 8th, invites inspirational group stories to be carried out on Valentine’s Day on the RJ Rochie show-Mirchi Insta Pyaar.

There is a great deal of emphasis on gay couples every year on Valentine’s Day, but there’s not enough talk about same-sex love.Despite the judgement on Section 377 of IPC, marriages are also frowned upon within the LGBTQ+ community. Therefore, with its ‘Pride Wala Love’ campaign, Mirchi aims to celebrate the different colors of pride this year, showcasing how every hue is special. The campaign gives a voice to the tales of exploration, coming out, and discovering love as an LGBTQ+ member of today’s culture, taking the most touching tales to the fore.

With the ‘Pride Wala Love’ campaign, Mirchi would take on board tales of passion from the LGBTQ+ community in the week leading up to Valentine’s Day-their experiences, dilemmas, the challenges they face, and the full spectrum of feelings they feel in same-sex relationships. With over XX entries, they have had an overwhelming response and are happy to provide a forum for these stories.

This year, the Mirchi Insta Pyaar team decided to do something new, not only an expansion of mainstream love stories but something that would include all the voices that are sometimes left unheard. They interviewed the likes of Yogi and Kabeer, who curate podcasts on Spotify about gay marriage, and Sushant Digviker, the legendary drag queen of India, among other people during the campaign to talk about what love and romance mean to them.

The initiative was introduced on Mirchi’s most romantic RJ-Mirchi Rochie’s social media handles where the members of the LGBTQ community were invited to send in their stories. In a three-hour chat with Mirchi Rochie on her special program, Mirchi Insta Pyaar, from 9 pm onwards, selected 20 stories were chosen from over 200 entries received to be aired on Radio Mirchi.