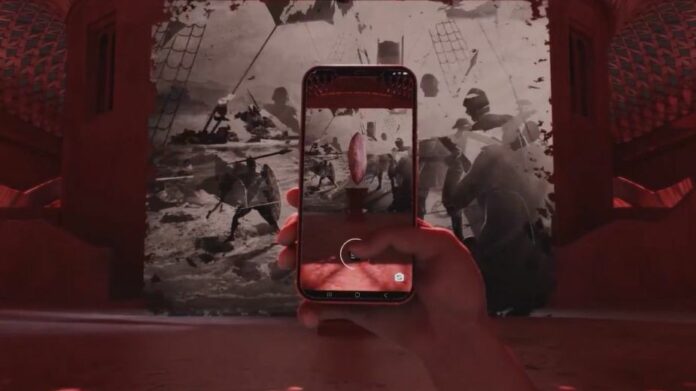 The Unfiltered History Tour is a cross between the real-world uses of the hacking collective Anonymous and the fictional world of Alan Moore’s V for Vendetta.

Guy Fawkes-clad Guy Moore’s protagonist sought to overthrow Norsefire, Britain’s authoritarian government, and usher in a new period of liberty. Wearing the same mask, members of Anonymous launch sophisticated cyberattacks on companies and governments whose actions they believe have gone unchecked for too long.

This tour was a covert attack on the British Museum in London, created by Dentsu Webchutney (now Dentsu Creative) for Vice Media. The creators employed filters to reconstruct the museum tour focused on 10 contested artefacts, inform the audience with the facts surrounding these objects, and promote discussions concerning their repatriation.

Anyone can get an immersive audio-visual tour given by a voice from the country the British colonised and stole the artefact by simply scanning any one of the 10 objects on display with the filter. With this journey, the colonial empire and the history it has narrated for current and future generations are losing their influence.

The experience after the trip

The benefits of a project that took 18 months to complete have been enormous. At the Cannes Lions International Festival of Creativity 2022, the campaign received the most awards, including four Grand Prix and a Titanium Lion. Dentsu Creative was named Agency of the Year as a result of it.

The Unfiltered History Tour won largely at the Spikes Asia awards this year as well, making it the project with the most honours around the Asia Pacific at The One Show 2022.

In retrospect, the “online conversation it drove,” whether it was Shashi Tharoor tweeting about it to someone taking the Unfiltered History Tour becoming the most-watched video on TikTok under the hashtag #BritishMuseum, was the biggest impact, according to John Montoya, senior director of content strategy at Vice Media.

The technology is being filtered down.

The campaign’s main character is technology. The tour would only be an idea without it. The original concept was to build a website, and every time you scanned an artefact, information about it would appear on the internet, according to Gurbaksh Singh, chief innovation officer at Dentsu Creative. A website was not social, though, therefore social media amplification was essential for this campaign.

The second suggestion was to utilise scanners on Facebook, which checked the social component box but did not let you record your tour experience, which is what the tour’s creators had originally envisioned: people sharing their tour experiences on social media and advancing the idea.

The ideal moment to possess the talent.

The majority of the team that worked on this project at Dentsu has relocated to Bangalore-based creative firm Talented. They both had the best possible start in the new agency.

Nishanth E - August 9, 2022
0
Tata energy has joined hands with the NEWS18 network to release ‘Sustainable is potential’. The marketing campaign's goals are to propagate and...

This Raksha Bandhan unwind the luxury indulgences at The Claridges, New...