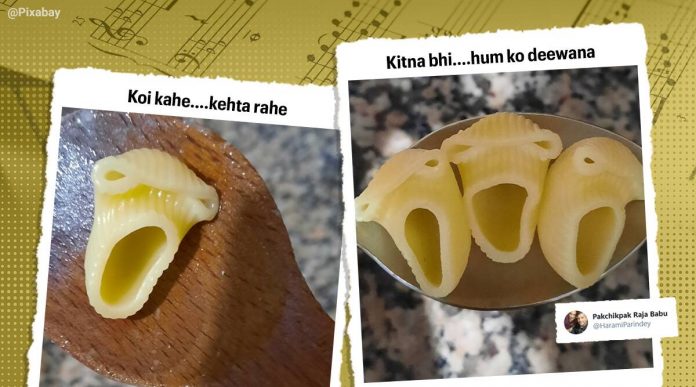 The most innate stuff often tend to trend on the internet. It all started when a Turkish Twitter user placed a picture of half-boiled macaroni on a spoon, saying that the pasta started screaming and he didn’t know what to do about it. Many people are in the middle of the existential struggles of pandemic and relate it with pasta. Pareidolia is best defined as the tendency to see a sensation as an object, pattern, or sense known to an observer. This also expresses itself as seeing images in clouds, seeing faces in inanimate objects or geometric forms, or hearing secret meanings in songs.

Brands did not lose the chance to use the shouting pasta in a campaign trend. Food delivery service Zomato used it to create a relatable meme of India’s favorite beverage-chai. Unacademy used the meme to take users on a little nostalgic trip-reminding them how students used to welcome teachers in school classrooms. Dunzo used the format to create a meta-meme on the dedication they got from users to their original proposals against the commitment they received from marketing posts. Tinder India used the format to make a frantic joke about getting likes and super likes on dating.

Even Airtel India hopped on the trendy bandwagon, telling consumers to supersize their content and watch it on the big screen. Matrimonial service provider Shaadi.com used the trend to make a frantic comment about COVID weddings. Ixigo knows how hard it can be to schedule a trip to Goa for your friends.

Oyo Rooms even used Goa to make a frantic remark about flying after the pandemic. Cafe Coffee Day used the propensity to chat about the consistency of their coffee. Dell India reminded users that typing in caps might sound like shouting. Voot used the format to chat about actress Rubina Dilaik and ask users where they wanted to watch her work. JSW Paints took the chance to highlight that their hue collection is nominally priced at the same cost for all colors.

It does not require huge time to create trends in markets, even a portion of pasta can generate a revolutionary trend and it is widely accepted. Every brand chooses this as an opportunity to flourish.