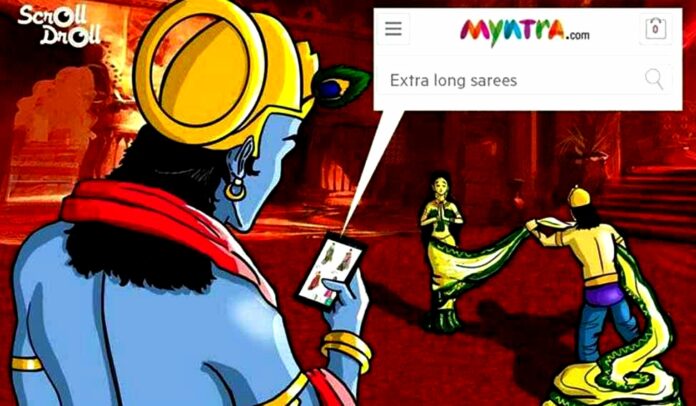 It is unfair when a brand has to face the brunt of the creatives they did not commission. Even a small rumour about someone or something can create a black mark in the neat track record of the business.

Back in 2016, a Delhi-based content creation platform that goes by the name ScrollDroll, posted a graphic portraying Durshasan disrobing Draupadi, and in a comical manner, Lord Krishna searching for extra-long sarees on a popular e-commerce platform which happened to be Myntra, on a smartphone.

Regarding its involvement in the creative content, Myntra was quick to discredit its name and said it was not to be blamed or made subject to allegations. Myntra claimed that it wasn’t associated with ScrollDroll by any means. ScrollDroll accepted responsibility for the creative work, confirming that Myntra had neither direct nor indirect link behind the artwork, through a tweet.

The agonizing thing is that the same creation has surfaced on social media again in August 2021, for which Myntra once again is under the whirlwind of angry emotions from the netizens, who are calling Myntra a mascot of Hinduphobia. Myntra is being held responsible for hurting the Hindu communities’ sentiments. A hashtag has started trending on Twitter, #BoycottMyntra, with over 10,000 tweets getting into circulation.

To limit the damage, brands have to respond immediately and decisively owing to the power that social media wields these days. But the damage has already been done. Brands need to clarify every allegation thrown against them with the appropriate information and without delay, maintaining silence can prove to be detrimental to brands as the issue can get escalated.

In such situations, brands do get support from brand-loving people. Brand evangelists and influencers can be called in for help to de-escalate the situation and make revealing clarification regarding the unfortunate situation. With the logo being used by some content creators, consumers get confused or believe that the brand itself is involved in such content creation, hence blaming them for things they did not do.

Brands are willy-nilly pushed into such controversies only because some random content creator makes an artwork that has some of the brand’s elements in it.

To beat such issues fast and to nip the growing problem in the bud itself, the brands need to have a ready action plan for any kind of such challenge that might befall them anytime in the future. Creating a polished fresh face after being subject to unreal blackmarks is hard, but possible as the truth always prevails, but it is up to the brand how fast they work to bring the truth out of the haystack of false allegations.

Author - December 1, 2021
0
The saving proportion ought to be targeted to fulfill their needs, desires, and needs not just for the current circumstance except for...